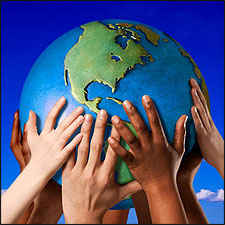 This week we’ll be turning out attention to another language with a large number of false friends with English: German. As English is a Germanic language, there are many cognates between the two languages. However, this shared history also makes distinguishing between true cognates and false friends especially challenging. The following false friends will give you an idea of why it is dangerous to automatically assume that a German word has the same meaning as a similarly-spelled English word.

Literally translated, ambulanz does not mean “ambulance.” Instead, it refers to an emergency room. While ambulanz can be used in the context of an emergency, the exact word for ambulance is krankenwagen

Das bad refers to a bath, bathroom, pool, spa, and so on. Several German words are equivalent to the various meanings of the English “bad,” but the most common one is the adjective schlecht.

The German word bald translates to “soon” in English. Use kahl for “bald” in a general sense or glatzköpfig/kahlköpfig to say someone is bald-headed.

Like other languages we’ve looked at, the deceptively-spelled eventuell expresses possibly, not eventuality. Instead, the words endlich and schliesslich are used to express eventuality, inevitability, and finality.

This false friend refers specifically to family or a lack of formality. To say that you know someone or something well, use bekannt or vertraut.

These words are easily-confused because they have similar but distinct meanings. Gelernt means “learned” or “skilled” in the sense of being proficient in something. Gelehrt is skilled in the academic sense, meaning scholarly, taught, or bookish.

Kittchen is a slang term for “prison” (gefängnis). Unless you’re talking about a prison kitchen, you’ll want to use küche.

Konsequent translates to “consistent(ly).” Folglich expresses the ideas of consequently, therefore, and thus.

Noten means “music” or “score.” If you want to request the notes or memo from a meeting, you’ll need to use notiz.

Roman means a novel. Römer is the German noun for a person of Latin or Roman descent.

Sympathisch means like likeable, nice, or pleasant. To convey a sense of sympathy in German, you’ll need to use either mitfühlend (compassionate) or verständnisvoll (understanding).